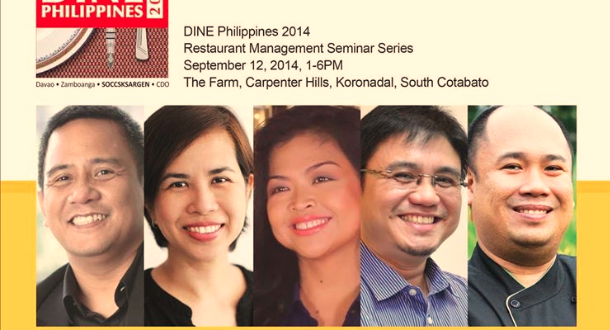 by Homerun Nievera |via FoodFindsAsia.com |

In September 12, 2014, the Dine Philippines 2014 seminar team goes back to Mindanao — South Cotabato!

This time with special guest speakers, Darah Consunji-Mateo of Good Burgers and Chef Myke “Tatung” Sarthou, the SOCCSKSARGEN team promises an exciting menu of topics for the food service industry in the region.

The roster of expert speakers are:

ADOLF ARAN JR. speaks about “What’s Hot? What’s Not? Trends in the Foodservice Industry”. He is a Food Entrepreneur, a Management Consultant for Restaurants, a Sought-After Trainer in the Foodservice and Hospitality Industry, and a Food Journalist all rolled into one.

He is currently the PRESIDENT/CEO of his 12-year old management firm, COURAGE ASIA and the EDITORIAL CONSULTANT of F&B World, the only trade magazine for the foodservice industry. He is currently a FACULTY MEMBER of the Entrepreneurs School for Asia and a BUSINESS DEVELOPMENT DIRECTOR & PARTNER of the CAFÉ 80s Music Bar. He is a Director of TERRA FIRST BITE and www.FirstFoodAsia.com. He is an honorary member of Association of Hospitality Educators and Practitioners of the Philippines (AHEPP).

He is a firm believer that the time of the Filipino cuisine to be globally accepted has finally come. He is also a staunch advocate of the Filipino entrepreneurship, especially in the field of food and service and tourism related industries. He is a graduate of the University of the Philippines, married and with 2 sons, whom he constantly tries to pass on the love for cooking and the passion for great food.

HOMER NIEVERA shares his expertise on building one’s food business using online and digital tools. He is a serial digital entrepreneur, a strategist and a tech visionary.

Homer, also known as “Homerun,” has a knack at flipping tech businesses and create strategies that up revenues and valuations of companies. He helped do this at both Friendster and Multiply when he headed global revenue strategy and advertising operations for both sites — the only Filipino to hold such important global posts for US and Silicon Valley-type firms.

As a digital strategist and marketer, he has crafted and implemented some of the most strategic campaigns for companies and personalities across industries. Apart from brands, he also directs campaigns for celebrities and politicians. One digital campaign he did resulted in winning a seat for a Senator.As a revenue strategist, he helps transform startup teams into powerhouse money-makers across various markets. This is culled from more than 15 years as a sales superstar and business developer.

As a tech-preneur, he does startup work or act as mentor to young mavericks and budding enterprises. he has worked for tech and digital startups since the late 1990′s. He has overcome major events from the Asian financial crisis in 1997, the dotcom bust in 2001 and the US financial crisis in 2008. As a business consultant, executive coach and serial entrepreneur, his mantra is all about valuing long-term win-win partnerships, business with integrity, and creating multiple revenue streams while maintaining cost-effective operations. Some startups he handled have resulted in profitable capital infusions, joint ventures and buy-outs.As a people-person, Homer has led and managed through tough times and have helped restructure organizations that have lost their zeal and direction towards profit. He believes that a healthy company culture is essential to its long-term profitability.

Homer currently heads two venture development companies in the Philippines that build and manage niche content sites as well as consumer apps. He also manages his startup blog Negosentro.com and is the publisher of FoodFindsAsia.com, a magazine-styled blog for the food service industry in the Philippines and the rest of Southeast Asia.

Homer, an advocate of lifelong learning, will soon launch a free education site targeting under-served audiences in the emerging economies like the Philippines.

He is a successful chef and restaurateur with his own restaurant simply named CHEF TATUNG after his popular moniker, which is also recognized as one of the country’s leading Filipino Themed restaurants in metro Manila and one of the top restaurants in the country. He has been dubbed by the Philippine Daily Inquirer as one of the Ten People worth knowing for 2012 and the following year as 2013’s Top New Chefs by F&B world magazine and was included in Food Magazines yearend Best list in Dec 2013.

He is at the forefront of promoting Filipino cuisine and pushing it to achieve world class status. He is an advocate of using local ingredients and in an active supporter of small farmers around the country. He is a member of the board of trustees of the Organic Producers Trade Association (Opta) the only internationally recognized organic group in the country as well as a member of the Culinary Historians of the Philippines (CHOP). Chef Tatung is considered as one if the countries foremost experts in Filipino cuisine and culinary history.

He is also a regular resource person, speaker and consultant to various companies and media outfits around the country and has appeared in almost all major TV programs taking an interest in food and culinary history. He has been featured all major Food Magazines in the country as well as in international lifestyle publications. He was recently invited to be a guest judge for the Amazing Food Challenge aired on the Asian Food Channel and has been invited to judge in several cooking competitions around the Philippines. Chef Tatung will soon release his first book on the evolution of Philippine cuisine and the Filipino palate.

His knowledge of Filipino cooking was learned at home from his parents and grandmother. It was his Cebuano-Bicolano heritage that brought his culinary exposure to new heights and where he further honed his culinary craft. His pioneering innovation in Philippine cuisine through the years has culminated in the opening of his own restaurant highlighting his reinvention of these popular Filipino recipes with a twist. He has spent the last few years researching and exploring the country to deepen his knowledge of his heritage as well as complete his book. He has consistently kept eye on tradition, always staying true to these natural flavours of the dishes. One of his creations, Pandan Pichi pichi with quezo de bola was named one of the best desserts in the country by the Philippine Daily inquirer this year.

Chef Tatung took up management at the University and Cebu where he also served as Editor in Chief of their University Paper for two terms, where he received various recognitions for his work from the College Editors Guild of the Philippines. He worked as a journalist before starting a career in culinary arts. Today he is a sought after chef, management consultant, writer and teacher.

DARAH CONSUNJI-MATEO talks about the lessons and best practices in starting one’s food business at the DINE Philippines in SOCCSKSARGEN on September 12, 2014, at The Farm, Koronadal, South Cotabato.

She is a graduate of UP Diliman with a degree in Hotel and Restaurant Adminstration. She worked for 2 years in the hotel industry before diving into business. Her first foray into business was in the personal care industry, marketing and distributing their own brand of specialized soap. She went into the food industry a year after closing the first business and was joined by her sister and cousins as silent partners. A semi-vegetarian, she built the business around her personal preference, believing that you should be your business’ primary client.

Good Burgers Co. started April 2001 with a humble yet cozy take out counter located at 106 E. Rodriguez Jr. Ave., C5 Road, Pasig (within the compound of San Jacinto Panciteria, across Valle Verde). GoodBurgers arose from the need for healthy alternatives to traditional fast food, with chicken giving a less sinful yet still tasteful twist to mainstream beef patty burgers. Chicken not only proved to be as good as beef…but better! This healthy food offering complemented the growing consciousness towards a responsible diet. Four years later, GoodBurgers introduced their vegetarian line of burgers and has been twice awarded as the best vegetarian burger by PETA Asia. It has also been rated top 2 by Spot.ph, head to head with other non-vegan burgers.

Her 360-integrated marketing campaigns have garnered credit locally including PRSP’s Anvil Awards, IABC’s Quill Awards, and UA&P’s Tambuli Awards, and internationally such as the International Business Awards (Stevies), among others. One of her more notable campaigns is the Toblerone National Thank You Day campaign, which earned the Global Integrated Marketing & Communications Award, as well as the Global Best Practice in Marketing from Kraft Foods Worldwide. It was a first win for Asia Pacific by a PR-led marketing program, and its strategy was adopted in other countries.

As a brand architect and strategist, Amor believes that reputation management is indispensible in any corporate or branding campaign, especially in a country that has one of the highest risk factors in the world. Hence, she sought training in the US and Australia for crisis and risk management, and has since been consulting and conducting trainings for companies and organizations in the Philippines for issues and risk communications management.

Her many roles also extend to being a steward of art, as she considers this as a discipline that lends dimension to her products and campaigns. Through creative collaborations, Amor connects elements that people have traditionally kept separate. Art and design are her non-negotiable creative inputs, differentiating and elevating both her processes and outputs.
DINE Philippines is an annual conference series that gathers some of the industry’s best restopreneurs and culinarians to inform, educate, and inspire its audience of the top trends and best practices in managing food businesses. 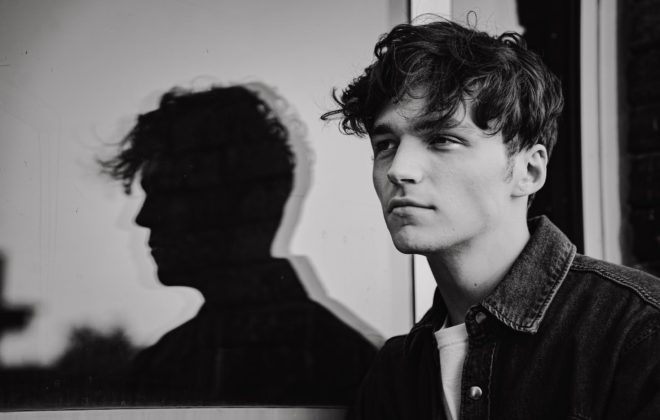 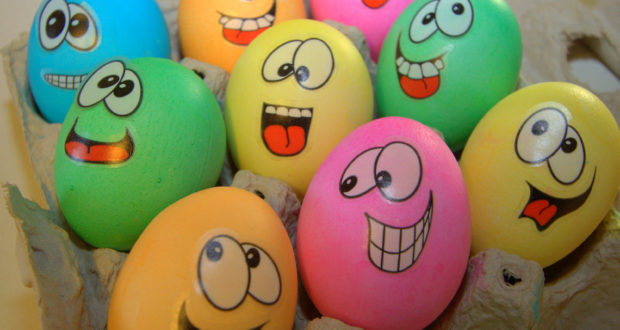 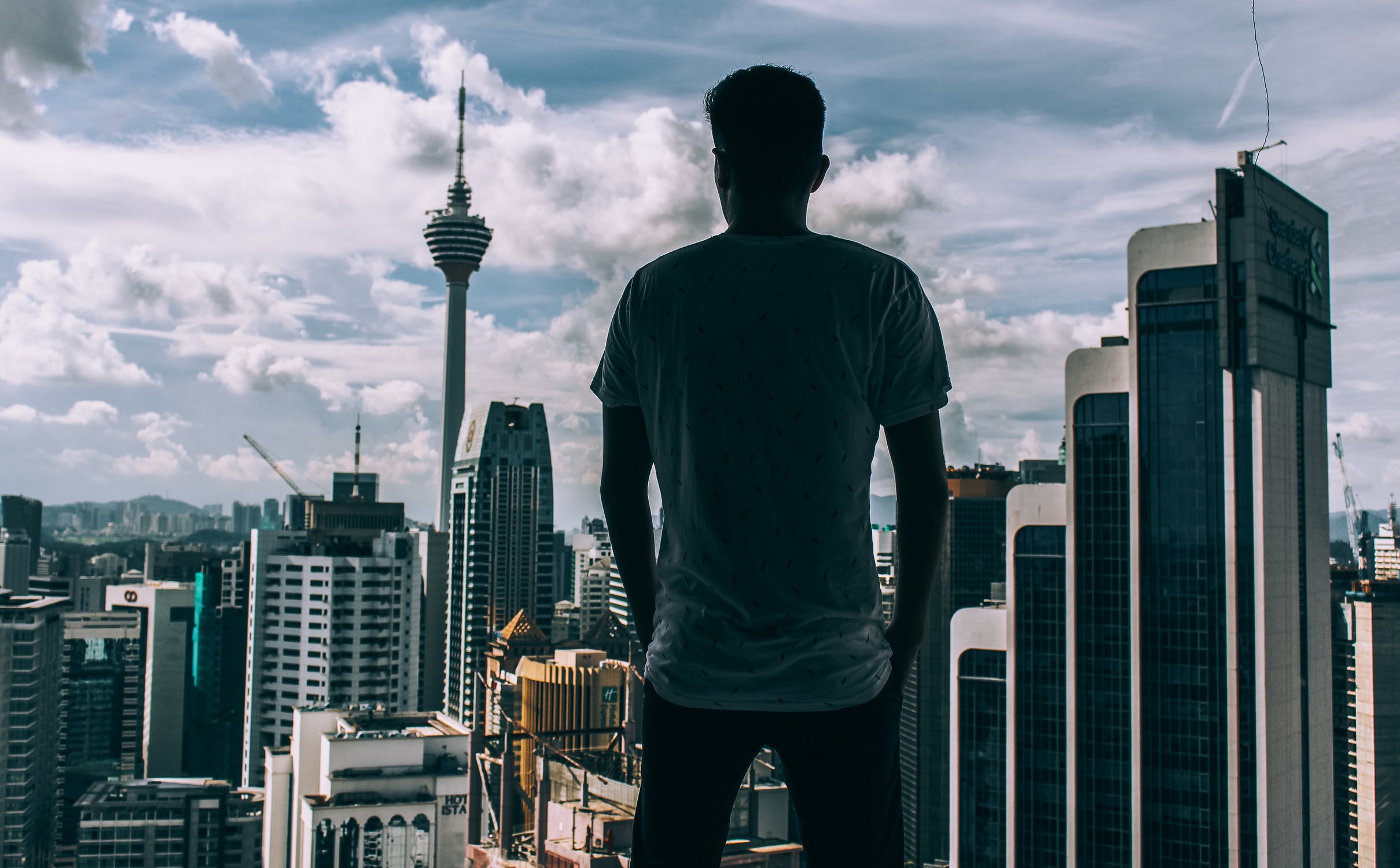